Story Time Chess’s brand-new Level 3 Tactics Expansion is chock full of new friends, wild adventures, magic spells, and more. But we know that you rely on our award-winning chess curriculum to deliver nuts-and-bolts knowledge that expands kids’ minds and sharpens their gameplay, all through fun, engaging stories. So what will you find inside Story Time Chess: Level 3?

As you might have guessed, Story Time Chess: Level 3 takes another step beyond the basics, introducing tactics that help even the youngest students through the notoriously tricky middlegame.

Surprise, surprise—middlegame is chess lingo for the moves played between the opening and the final phase, or endgame. The middlegame can be challenging to navigate, as it tests your ability to follow through on your plan while your opponent does all they can to foil it and implement their own.

Even for seasoned players, the middlegame can feel like trudging through a desert, something our characters experience quite literally in the new storybook. But never fear, Story Time Chess: Level 3 is here! Keep reading to learn about the next-level skills kids learn as they journey across Chesslandia once again in our Level 3 Tactics Expansion!

King of the Castle

In our Level 2 Strategy Expansion, kids discover the Secret Missions: three rules of thumb to follow any time they start a full game of chess. The second Secret Mission is castling, a special move that keeps the king protected while increasing the other pieces’ mobility.

Because castling is a complex maneuver subject to various conditions and caveats, we kept Level 2’s explanation simple. By contrast, Story Time Chess: Level 3 leads children on a deeper investigation of castling in a recurring mini-game we call “Castling Quiz,” a series of puzzles that explores the full castling rules in all their intricacy.

Multiple Castling Quizzes throughout the book provide readers with all they need to know about this powerful tactic which opens the door to the middlegame in profound ways.

Forming good habits is crucial to chess success, as no player can get by on instinct alone. It’s especially important for young players to get in the habit of examining the whole board before making a move.

The first chapter of Story Time Chess: Level 3 introduces board analysis with fun mini-games that relate back to the stories. For instance, the first mini-game in Chapter One asks readers to help King Shaky find the winning move of a chess game against his new adversary, a crafty magician named King Richard.

Though they’re sometimes used interchangeably, strategy and tactics have distinct meanings: A strategy is a high-level “master plan,” while tactics are individual actions taken to carry that plan to completion. And as any experienced chess player will tell you, you can’t win a game without careful tactical deployment of the pawns.

But many beginners mistakenly undervalue their pawns. They might assume that, because they’re so numerous and slow-moving, pawns are easily expendable or less important than their flashier teammates. The truth is, pawns are extremely powerful when they stick together in pawn chains, diagonal lines or V-shaped formations in which the leading pawn is defended by the pawn diagonally behind it, and so on down the line.

Story Time Chess: Level 3 introduces this vital tactic by dropping readers into an in-progress mini-game of Queen vs. Pawns, an exciting scenario in which the pawns can only achieve victory by sticking together. Your child will see their brave little pawns in a whole new light and never look back!

Our exploration of middlegame tactics in Story Time Chess: Level 3 continues with a foundational organizing principle of the chessboard: ranks, the “horizontal rows” of squares, and files, the “vertical columns.”

Level 3’s rank-and-file fun begins with two brand-new characters, Beatrice the Elephant and Mango the Giraffe. Beatrice and Mango walk a long way to Chesslandia so they can learn the great game. But when they arrive, they find that a mysterious new nemesis, King Richard, has cast a spell on the whole kingdom, making everyone forget how to play!

In Chapters Three and Four of our new expansion book, readers take Mango and Beatrice on another walk, this time around the chessboard, and learn to identify the numbered ranks and lettered files. With that knowledge under their belts, kids then explore another dynamic tactic: occupying open files with their rooks to control the board and create opportunities.

As we outlined in a recent blog, Story Time Chess: Level 3 introduces kids to an extremely valuable decision-making tool: piece point values. In chess, each piece has a specific point value and understanding that hierarchy is essential for mastering middlegame tactics.

Kids usually intuit the strength differences between the pieces after completing the lessons in Story Time Chess: The Game. After all, it makes sense that a queen might be more powerful than, say, a bishop, because the queen can move straight like a rook in addition to moving diagonally like a bishop. But learning the exact point value of each piece helps children make greater sense of these power dynamics, building their confidence and improving their gameplay.

In Story Time Chess: Level 3, those strength differences are revealed in hilarious games of tug o’ war. Chef Squishyfeet has been conducting kooky culinary experiments, creating gigantic versions of spaghetti, french fries, pickles, and more, which the characters use in place of rope for their tugs o’ war. Through captivating stories and math-forward mini-games, our tactics expansion provides a super fun context for absorbing this crucial element of chess’s rule set.

The middlegame can be especially tricky for young players to navigate, not only in terms of strategy and tactics, but from an emotional standpoint. As you’ll see in our new expansion’s “King Richard” storyline, the sheer number of decisions that arise in the middlegame can lead any player to feel overwhelmed. In those situations, sportsmanship has a tendency to fall by the wayside.

Well, we’ve got tactics for that, too! To help even the most self-possessed youngsters keep a clear head as the game heats up, several chapters in Story Time Chess: Level 3 include role-playing exercises that promote resilience, positivity, and what psychologist Carol Dweck calls a growth mindset.

For instance, if your child is struggling to contend with a tough middlegame moment, we ask them to substitute “That’s hard!” for “Challenge accepted!” In addition, our tactics expansion gives players fun side activities to complete within their regular games, such as calling timeout so opponents can work together to find the best moves for both players.

In other words, Story Time Chess: Level 3 places as much emphasis on sportsmanship, respect, and fair play as it does on core chess concepts.

Like all of our learning products, Level 3 ties each new skill directly to a captivating narrative, inviting kids to discover the game’s nuances alongside their favorite characters. This award-winning approach creates an emotional connection between our students and the material which helps cement new information far more effectively than rote memorization.

With new characters, grand adventures, and humongous french fries, Story Time Chess: Level 3 Tactics Expansion is your ticket to the life-changing fun of higher-level chess. If you’ve worked your way through Story Time Chess: The Game and our Level 2 Strategy Expansion, you’re more than ready to embark on this next step of your child’s chess journey.

Head to storytimechess.com and pre-order our Level 3 Tactics Expansion Storybook or the Level 3 Tactics Bundle, which includes an all-new coloring book, phonics-focused activity workbook, and chess puzzle book, as well as the Level 3 storybook. Chesslandia awaits! 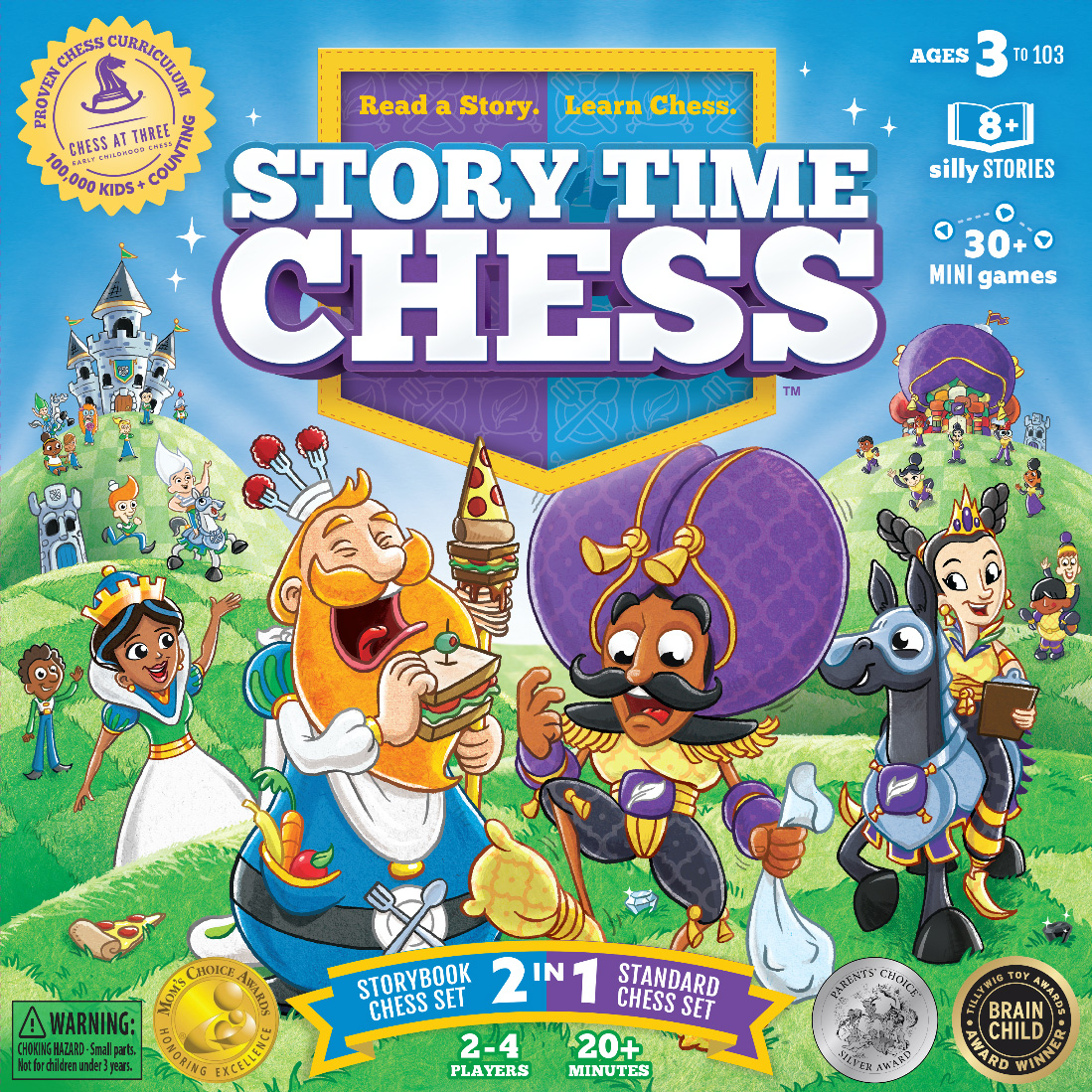